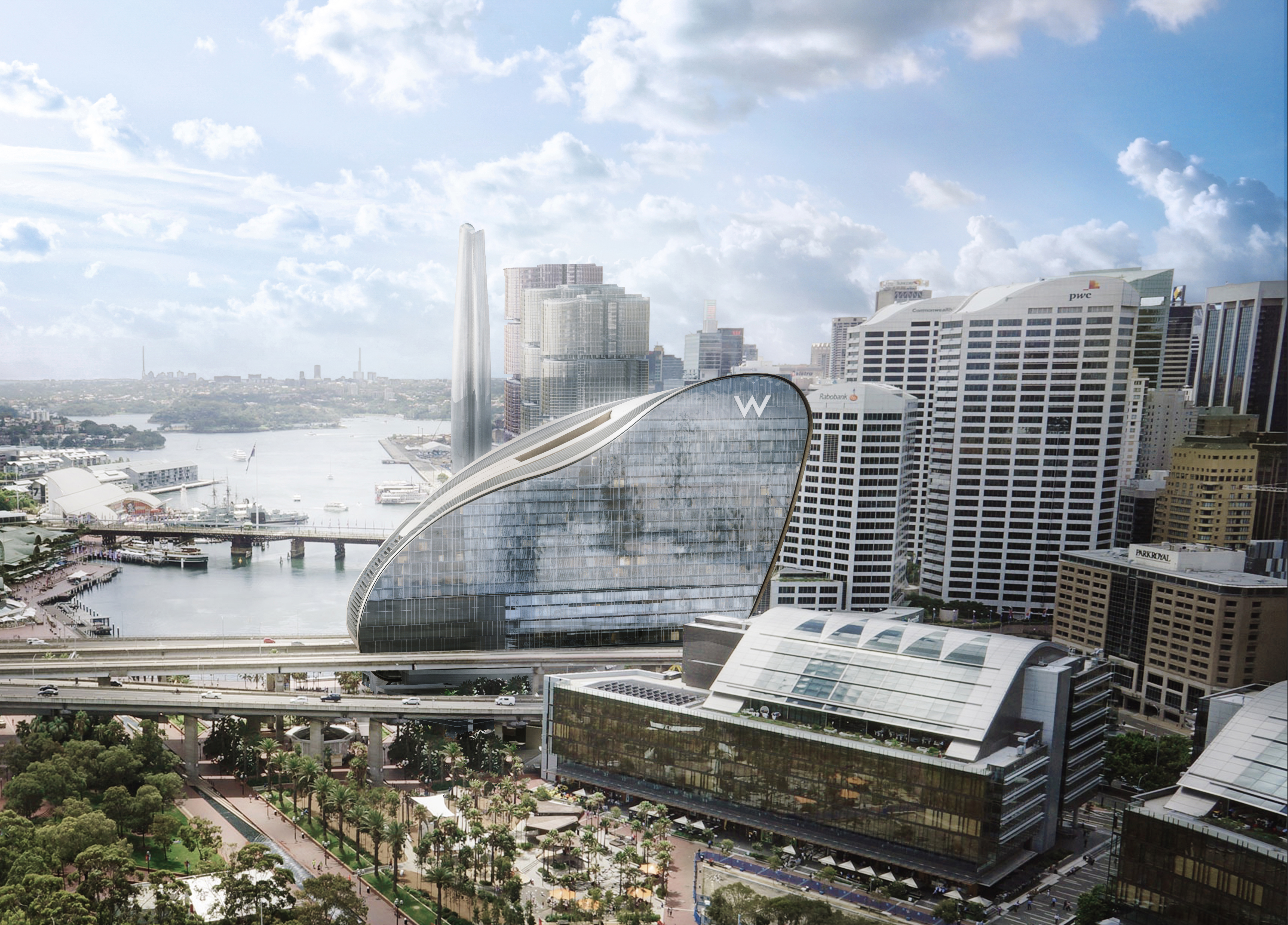 By the BEAM teamNovember 29, 2022No Comments

Australia will step into a promising year of shiny new venues and spaces amid optimistic outlook on business events recovery.

From the landmark Queen’s Wharf development in Brisbane/Meeanjin to the inspiring rebuild of Southern Ocean Lodge on Kangaroo Island, 2023 is shaping up to be a blockbuster year of new openings across Australia.

Sydney/Warrane’s Darling Harbour precinct is set to turn heads with the opening of the W Sydney in October 2023. This new-built hotel has been tantalising onlookers with its intriguing glass-clad exterior and undulating ribbon-like form, inspired by the mischievous spirit of the Australian ‘larrikin’. The luxury hotel will boast 585 elegant guest rooms and suites showcasing the stellar city and water views, along with 1,300 sqm of event space.

Other noteworthy features include a two-storey rooftop bar and the W Hotel’s signature Level 29 WET® Deck with a heated infinity pool overlooking Darling Harbour. Guests will be spoilt for choice when it comes to dining with direct access to Darling Harbour’s array of restaurants as well as the nearby Barangaroo precinct to complement the hotel’s onsite dining experiences. With pedestrian links across Cockle Bay to Sydney’s International Convention Centre (ICC Sydney), the W Sydney will enrich Sydney’s business events offering.

The Ritz-Carlton brand, part of Marriott Bonvoy, will debut in Melbourne/Narrm in March 2023. Located in the heart of the city on Lonsdale Street, The Ritz-Carlton Melbourne will boast 257 stylish rooms and suites housed in a spectacular new 80-storey building. Instead of the usual ground-floor lobby, guests will be whisked to level 80, where they can marvel at the spectacular city views upon check-in.

Alongside its signature dining experiences and event spaces, the hotel will boast an infinity pool and holistic wellness facilities. From works by local artists to a hyper-local culinary story and uniquely Melbournian décor, the hotel aims to encourage guests to connect with Melbourne’s creativity, diversity and culture.

2023 will see the highly anticipated opening of the AUD2.6 billion Queen’s Wharf development in Brisbane/Meeanjin, which is due to commence a staged opening in the year’s second half. The extraordinary new riverfront precinct will offer ultimate flexibility for business events with a wide variety of indoor and outdoor event spaces including a 2,000 sqm ballroom for up to 1,900 guests, plus restaurants, private dining rooms and rooftop gardens.

The signature arc-shaped building will be home to Sky Deck, an open-air rooftop runway of restaurants and bars overlooking the Brisbane River. The precinct will also offer an impressive mixed-use 12,000 sqm (129,167 sq. ft) leisure deck and a three-level shopping gallery, set to house more than 100 prestigious retail brands in the historic Printery building. Cementing Queen’s Wharf as a destination in itself will be the opening of The Star Grand hotel in late 2023 which will boast 340 five-star rooms across two river-facing towers, followed by The Dorsett (4.5 stars) and the six-star Rosewood in 2024/25. All this and more will be within easy reach of the Brisbane Convention & Exhibition Centre via a new pedestrian bridge.

On South Australia’s spectacular Kangaroo Island, off the coast of Adelaide/Tarntanya, works are underway to rebuild the magnificent Southern Ocean Lodge. The Baillie Lodges property – one of the Luxury Lodges of Australia – was destroyed in the bushfires of 2020 and the new build, dubbed SOL 2.0, is set to open in late 2023.

Providing a five-star accommodation option for groups exploring Kangaroo Island, SOL 2.0 will combine the timeless aspects of the original lodge with grand new features designed to elevate the guest experience of the wildly beautiful island. SOL 2.0 will largely maintain its original footprint, with 25 luxurious suites easing along the coastline. In a deft design manoeuvre, each suite has been reoriented to offer even better views of the coast, drawing the eye to the Southern Ocean.

Environmental sustainability is core to the lodge’s new design, with significant hybrid solar and battery infrastructure allowing the lodge to continue to run off-grid in its remote location while reducing diesel fuel consumption by more than 50 per cent. “We’re looking forward to wowing guests once again with the wild beauty of Kangaroo Island,” said Founder James Baillie. “We hope SOL 2.0 will be a symbol of resilience and optimism for the future of Australian tourism”.

Planners will soon have even more reason to stage an event in the vibrant city of Cairns in Tropical North Queensland, which is renowned as the gateway to two World Heritage Areas – the Great Barrier Reef and the Daintree Rainforest. After revealing a refurbishment in 2022, the Cairns Convention Centre is due to reveal its major expansion in 2023.

The final stage of its A$176 million transformation, the expansion will deliver an additional 10,500 sqm that will include a large undercover tropically planted forecourt, an expanded main entry lobby, a 410-seat plenary lecture space, three 120-seat meeting rooms and additional exhibition space.

The signature feature will be a 500-seat rooftop banquet space and sky terrace with spectacular views over Trinity Inlet. The upgraded Centre aims to attract conferences and events of greater size and complexity, bolstering the city of Cairns’ reputation as an exceptional business events destination.

In Sydney/Warrane, hospitality company The Point Group has been working behind the scenes to transform the iconic Fort Denison, a Heritage-listed island in Sydney Harbour. The Group has taken out a long-term lease on the former penal site and military facility and will operate a restaurant, manage functions and conduct tours on Fort Denison from late 2023.

The design seeks to respect and celebrate the shared history and heritage of the island and provide a high standard of facilities for both domestic and international visitors. Acclaimed chef Joel Bickford – former executive chef of Aria Sydney – has been appointed as Culinary Director of Fort Denison and the new Shell House Sydney to develop incredible dining experiences that celebrate great Australian produce across both venues.

New South Wales National Parks and Wildlife Services has also commenced significant conservation works of the original buildings and the sea wall and is replacing the wharf to improve access to the island. “We believe Fort Denison is a key part of a trilogy of iconic landmarks in Sydney Harbour, along with the Sydney Opera House and the Sydney Harbour Bridge,” said Point Group CEO Brett Robinson. “We want the world to recognise that and to take notice of what is a very important heritage asset for both Sydney and Australia.”

For business events groups visiting Melbourne/Narrm, the new Melbourne SkyFarm will make an inspiring addition to an incentive program. Due to officially open in early 2023, this innovative venture will see a disused 2,000 sq m rooftop car park owned by the Melbourne Convention and Exhibition Centre (MCEC) turned into a sustainable urban oasis featuring productive gardens, event spaces and a café.

Groups visiting Melbourne SkyFarm can tour the working farm and orchard, sample honey from the rooftop beehives and improve their sustainability knowledge with bespoke sessions in the environmental education centre. Afterwards, they can enjoy a drink on the deck or a function in one of the unique event spaces overlooking the Yarra River. Close to MCEC and several high-end hotels, Melbourne SkyFarm is one of 2023’s most anticipated openings for Australia’s business events sector.